We are so excited to launch the BLUE KNIGHT RUBBER STAMPS blog with this very special announcement! 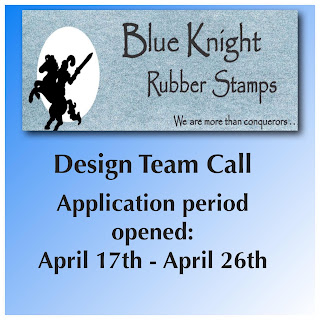 BLUE KNIGHT RUBBER STAMPS is  looking for creative stampers who are both talented and dependable for our new DESIGN TEAM.

-Ability and desire to follow a DT schedule for creating, sharing and posting your projects
(*Project schedule/assignments/requirements will be provided to DT members on a monthly basis)

-Promotion of BKRS on social media, at least 5 Facebook groups/galleries

--Applicant must be proficient in posting to social media, specifically Facebook...posting to your blog, taking and uploading good quality photos, and composing photo/blog tutorials.
-Ability to do video tutorials and YouTube videos not required, but a plus.

-DT members must send BKRS one completed card per stamp set sent to you.

DT Member benefits:
-You will receive BLUE KNIGHT RUBBER STAMPS stamps with each new release.
-During Non New Release month(s) you will receive stamp sets that BKRS would like to promote.
-DT members will receive an exclusive 25% DT discount on personal orders placed via the BKRS web site


If you are interested in applying for a DT position, please respond to Blue Knight Rubber Stamps via email at bkrsdt@gmail.com

Your email application should include the following:Applications that are not complete cannot be considered for a DT position. Please be sure to include all 5 items listed below in your email application.
1.Name, address and a short bio about yourself, including your crafting life.
2. Your blog address and links to other social media outlets that you use to display your artwork (Instagram, Pinterest etc)
3. Your YouTube link if you have a YouTube channel
4. Photos of 5 projects you’ve completed recently
5. List your design team experience ( provide dates/previous or current)

We are also looking for guest designers.
Your email application should indicate which position you would be interested in. (DT Member OR GUEST DESIGNER)

GUEST DESIGNER POSITION
NOTE: Guest Designer positions are monthly positions requiring 1 project weekly including one tutorial during your Guest Designer appointment and position.
Guest designers will be provided specific stamp(s) to be used for their required projects.


We are looking forward to hearing from interested applicants!